Happy end of the weekend! Here is late Friday post. I hope you had a great weekend. Congratulations to Germany for winning the World Cup, as I had predicted(on my bracket). But, the Rockets are not having a good week in the free agency world. So, hopefully the coming weeks will be better. I really, really, really doubt that Trevor Ariza will make a significant (or any) difference for us. So, find someone else, anyone else.

It was a pretty uneventful week. We beat the heat this week, by going to a friend’s pool. This month, we are having Summer Games at work. I played in the Dodge Ball tournament. We won one and lost one. The winners were insane, I would have lost a limb as hard as they were throwing those soft ass balls. This week, I am doing the Free Throw contest, wish me luck. And Xavier and I finally got to check out Barrel 31. They have a great Happy Hour.

Xavier took us to a huge park last weekend. I can say this about Kansas: They know how to do parks. Shawnee Mission Park is huge and full of activities.

Aspen received a kite for her birthday, and she has been wanting to fly it, so we decided to have a picnic and fly kites at Shawnee Mission last weekend. I do not remember kite flying being so difficult when I was younger. I mean it took me, 3 tries of maybe 30 minutes at a time of running around trying to get that thing up. My kite flying arm(left) was sore the next day. But, I HAD TO get that kite to fly.

Xavi, Aspen, and I took turns trying to fly that thing, while Xavier and Jaelan laughed and pointed at us. They said I lied about knowing how to fly a kite. But, it turns out, I had the strings wrong, Xavi figured it out, and the stupid kite finally got up in the air. I said I knew how to FLY a kite, not how to CONSTRUCT one. But it finally flew, and Aspen was SO SO uber excited. And so I was happy.

While we were at a coffee shop last week, she scratched open a mosquito bite. We didn’t have any band-aids on hand, so she suggested we do this instead:

And then she wanted to smell the flowers:

Also, she loves her Doc McStuffins doctor set that she received for her birthday, and she loves to take your blood pressure, on your leg: 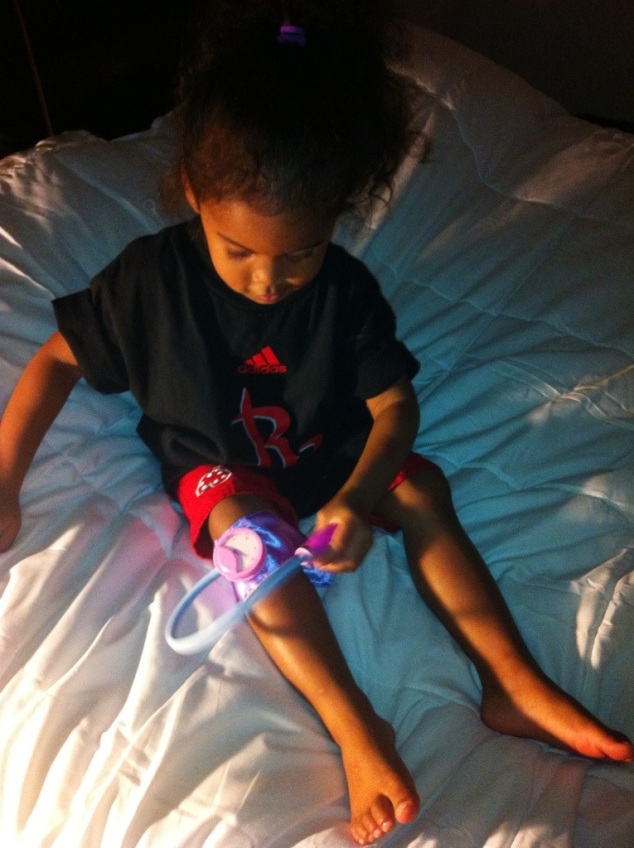 Aspen is obsessed with Frozen. She watches it several times a day. She sometimes refers to herself as Anna. When one of her sisters are being mean to her, she tells us that Elsa is being mean. Also, she now offers kisses called, A True Love’s Kiss. She will caress your face from the forehead to your chin, then lift your chin up to her face, and give you a kiss. It is the cutest thing ever. I will try to get it on video. Finally, Aspen and the kitty still hates Fudge.